Asbestos Experienced Removals to Identify and Dispose of Cement Roofing 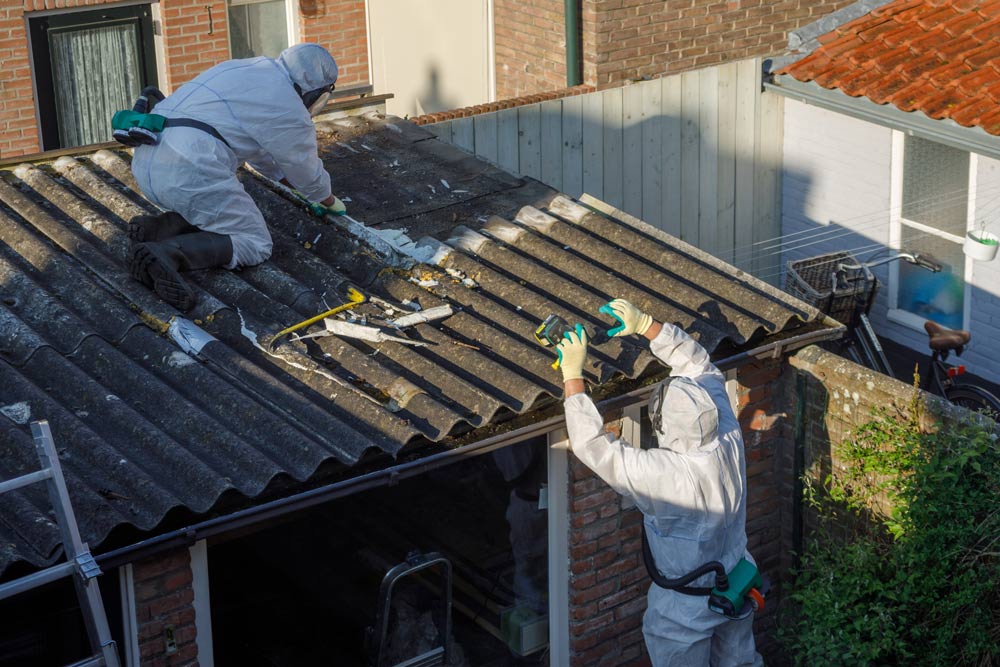 Corrugated asbestos roofing – it’s probably the one legacy building material most identified with Britain’s long history
of asbestos containing materials (ACMs). More than half (55 per cent) of all industrial or commercial properties in the
UK are still likely to be covered with asbestos cement roof, according to the Land Registry. Many asbestos
experienced removal firms consider this familiar shaped roofing sheet to also be most commonly dumped at the
roadside by illegal flytippers, along with other waste materials from a property renovation.

Given the known deadly health dangers of exposure to asbestos materials, it still appears that property owners and
building contractors continue to risk lives by failing to correctly dispose of asbestos roofing, as set out by the Control
of Asbestos Regulations 2012 (CAR 2012). In many cases, it is thought that the asbestos content of a roofing sheet is
“low risk”. There may be several reasons why the ‘low risk’ myth has endured, particularly with regard to roofing
products.

Firstly, as a water resistant, cement-based product, asbestos fibres were used as a strengthening agent in the
production of roofing materials. However, the asbestos fibre content tends to be around 10-15 per cent compared to
asbestos insulating board (AIB) which is usually 20-45 per cent, according to the Asbestos Removal Contractors
Association (ARCA).

Secondly, hard bonded asbestos fibres were most commonly used in flat, corrugated or compressed asbestos-cement
sheeting on garage roofs. The cement bonding compound was mixed with the fibres to produce a solid, rigid and nonfriable (non-disintegrating) sheet. However, it is not always fully understood that the integrity of the encapsulated
material can still break down sufficiently enough during asbestos removals to release tiny fibre dust particles.

A further complication involves the interior surface of an asbestos cement roof which can often also be lined with
plasterboard or fibreboard panels in which a paper lining is made from 100 per cent white ‘chrysotile’ asbestos.
Asbestos removal contractors can still sometimes find buildings where the lining panels were made from the more
dangerous brown ‘amosite’ asbestos or a combination of brown and blue ‘crocidolite’ asbestos.

Between 1950 and 1969, the highly toxic blue “crocidolite” asbestos fibres were used in producing cement based
roofing. The equally dangerous brown “amosite” fibres was used from 1945 to at least 1976, and also white
“chrysotile” fibres – which were exclusively used after the ban on blue and brown asbestos in mid 1985.
When the ban was enforced, so-called ‘low risk’ white asbestos was allowed to continue in the production of insulating
products used by the building industry. Medical research at the time observed that the white asbestos fibre type
appeared to remain within the membrane tissue of the lungs for less time than the brown and blue fibre types.

White asbestos finally banned at the end of 1999 and, as recently as 2011, the Government Office for Science has
confirmed that white ‘chrysotile ‘asbestos’ is a Class 1 carcinogenic. The department said that it may not be possible
“to determine a threshold level below which exposure to pure chrysotile could be deemed ‘safe’ for human health. The same applies for exposure to chrysotile from cement during removal and disposal activities.”

Neither a property owner nor even a building contractor may be able to recognise that the materials they are
removing contain asbestos. A survey carried out by the Health and Safety Executive (HSE) found that only 15 per
cent of tradesmen said they knew that asbestos may still be present in properties built up to 2000. Incredibly, more
than 8 per cent of tradesmen were unaware that insulation made from white asbestos continued to be used by the
building industry after the 1985 ban on using brown and blue asbestos products.

It may not be so straightforward to distinguish an asbestos corrugated roof from a non asbestos type after years of
weathering may have caused severe surface staining or bleaching, as well as structural deterioration. It is, therefore,
essential to ensure a thorough asbestos survey is carried out by an asbestos experienced surveys and removals
professional who will be able to correctly identify and safely dispose of an asbestos corrugated roof, as mandated by
the Control of Asbestos Regulations, 2012 (CAR 2012).