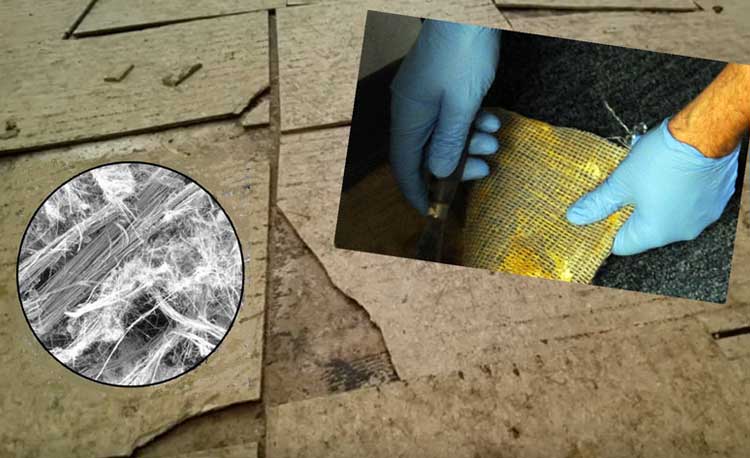 Are They Friable or Non Friable?

It’s one of the most frequently asked questions following asbestos surveys, but also prior to a decision on whether to carry out asbestos removals.

Do old floor tiles uncovered during a house or business renovation contain asbestos?

And if it’s hard-bonded asbestos can it still be a health risk?

The answer is not so straightforward.

From the 1960s to the late 1970s / early 80s – peak years of asbestos production in the UK – many insulating products, including thousands of building materials were made with asbestos fibres, including bonded, fire retardant tiles.

Decades later, they can still be found in all types of public and private properties constructed or renovated at any time up until the first brown and blue asbestos ban in the mid 1980s.

Friable or Non-Friable Prior to an Asbestos Removals

Defined as any loose fibre asbestos or ACMs that can be crumbled or reduced to powder by hand pressure.

Here the asbestos fibres are ‘bonded’ to a second material, such as a cement or resin binder which prevents crumbling or being reduced to a powder by hand pressure when dry.

However, by contrast to most asbestos materials, which can sometimes be found in a worn, damaged or friable condition, polymer-formed plastics have also been found to be more resistant to decomposition, and the fibres remain protected for a longer period of time.

It should be noted, however, that previously non-friable, hard-bonded ACMs, which have become damaged, fragmented or broken apart are now liable to also being friable.

This means the risk of airborne dust particles released and inhaled when handled.

A reassessment of the risk potential of ‘bonded’ asbestos is also advised when subject to fire, high temperatures, flooding, and severe damage caused by extreme weather or natural disaster.

As with other types of asbestos when damaged or disturbed, the deadly fibres are released as dust into the surrounding atmosphere and can be easily inhaled.

But how likely is it that you will find this type of tile buried beneath your floor?

If your property was constructed or underwent renovations at any time up until 2000, then the possibility can never be discounted.

Up until the end of 1999, when white ‘chrysotile’ asbestos imports were banned, this fibre insulation type was still in circulation and being used in property construction.

Asbestos Removal Not A DIY Disposal

The curly or ‘serpentine’ form of the fibres was perfectly adapted to be used in ‘bonded’ asbestos products such as, polyvinyl plastic floor tiles and stair nosing, commonly found in offices, factories, and notably, in stairwells.

Asbestos can also be present in bitumen adhesive used to affix the tiles to the floor and in the paper backing (100 per cent chrysotile), also found on the underside of some linoleums.

In some older properties, hard bonded asbestos can also still be found in airing cupboards and warm air heating systems, even the protective iron rest panel on an ironing board.

Hard bonded asbestos materials found to be intact, undamaged and in good condition, may be approved as sufficiently safe to be allowed to remain safely in place, secured or encapsulated.

However, if it is decided that complete asbestos removal is required, it is essential to ensure that an experienced asbestos removals contractor is appointed and not attempt a DIY disposal.

Under the Control of Asbestos Regulations 2012 (CAR, 2012), strict procedures need to be followed at every stage to ensure a controlled removal and prevent any risk of exposure to airborne dust particles.